The game has been on hiatus for a few weeks. Sent the following to my brother by email for him to ponder. The train element is borrowed directly from the Going Home adventure module.

Before Maks and team depart Krakow for Silesia, Elizka reports by radio from Warsaw. Things are quiet. And a promising development…

Straczynski regales the two Americans with stories of steam locomotives. Turns out the old man volunteered at the Stacja Muzeum, Warsaw’s railway collection. Smith and Nguyen take Jan Straczynski and his son, Casimir to the site.

The train museum itself is damaged, but not catastrophically. There are numerous lines of track leading west out of the city, most deep under debris or rusting rail stock.

Casimir is a naturalized American citizen. His father is not, but Casimir “found” a passport for his father. He wants to take what’s left of his family to America. They don’t care whether they go out through Germany (MilGov) or Yugoslavia (CivGov). The old man says that they can use most track in Europe (even in Warsaw Pact territory), but not Soviet track (wrong gauge).

A very handy vehicle card for the train by Ranting Savant

I’ve got the fuel consumption, armor profile, and other working info on the locomotive in a later blog post.

5 thoughts on “Warsaw: The Last Train Out” 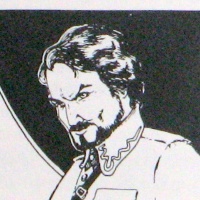 1705– 6th Guards Tank Division is entirely on the eastern bank of the Leine at Freden. The tail-end elements are moving into the area south of the crossroads of B64 and B3 roadways which has been designated as the division’s rear area. 1730– Crossing operations get underway at the now-operational Greene bridgehead. Lead elements of […]