This was easily the largest encounter since campaign opening. I’d read up on boat and riverine rules in the main rulebook, and the Pirates of the Vistula module. They were a bit spotty, and scattered. So I was having to make up my own rules too. Given the large numbers involved, I focused on flotation hits, rather than rolling for every individual crewmember and “radio” hit.

This will probably be the last post for a while, as my brother is going on a long-delayed sabbatical vacation. Good time to catch up on past posts you missed.

But, yes, we’ll resume this later.

Believing the town of Góra Kalwaria responsible for sinking one of their scout boats, the Korsarz returned in force on the morning. They’d punish the town for its impudence.

Except, of course, the townsfolk hadn’t taken potshots at the passing pirate boats. The Americans had fired the lucky shot that’d blown up the pirate speedboat.

Civilian spotters manning a forward position at the ruined railroad trestle radioed back to Maks at the castle that of the three boats in the lead, one had dropped anchor, and crew were setting up a mortar. More of the Korsarz boats motored past, heading upriver. Their “armada” was an eclectic collection of alcohol-powered boats, with hulls ranging from 10 tons up to 50 tons.

The mortar-carrier boat began dropping shells on the town, apparently aiming at rooftops visible above and through the trees. The townsfolk were to be given a harsh lesson.

The forward pirate boats soon noticed the Krolowa‘s huge barge chained astride the river, blocking travel further upstream. It was hard to miss.

Maks gave the order to open fire. The barge held the party’s two original amphibious vehicles, the BAV and the MAV. There was also a Vasilek auto-mortar and a quad-KPV, originally intended for an anti-aircraft role.

The Vasilek began hurling mortar shells in a high arc, scoring a lucky hit on the mortar boat, silencing it.

The quad-KPV roared, sending its first hundred rounds downrange, shredding the first of the lead boats.

The rest of the Korsarz gunned their engines, plowing upriver toward Maks’ weapons barge, intent on sending it to the bottom.

It was chaos. The barge’s weapons were chewing up the pirate boats as they arrived, chalking up several kills. The barge’s Vasilek was lowered and began throwing mortar shells in direct-fire mode. The quad-KPV was highly-effective, but was burning through its ammunition at a frightening rate.

It was far from a one-sided battle, as the barge heaved and rocked under numerous explosions. The Korsarz were heavily-armed. They had their own KPVs, as well as RPGs, AGS-17s, and more. The barge’s personnel were well-protected with steel and bermed earth, coal, and firewood. But the barge itself was a simple steel hull, and it was being punished hard.

On land, Maks ordered his BRDM-3 and OT-64 into action to provide fire from the shoreline. The BRDM found that its AT-5 Spandrel guided missiles were reliable boat busters, but Maks cringed at the cost.

The pirates had their own anti-tank missile on one of their boats, an ancient AT-3 Sagger, which scored two hits on the barge, before it too was sunk.

More bad news arrived, as the civilian spotters downriver radioed in that the “other half” of the Korsarz armada had arrived, including a sinister-looking torpedo boat.

Worse, townsfolk manning a checkpoint near the railroad at the west end of the city saw a large Jelcz truck blow past, taking the highway 79 behind them into town. They scrambled to intercept. 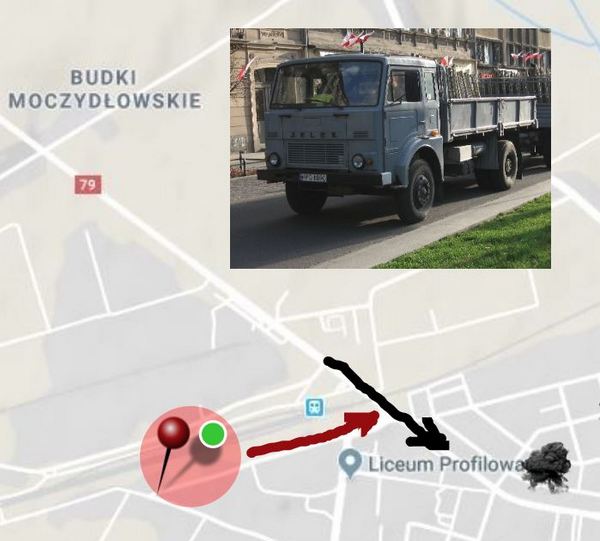 Maks cursed. His men on the barge reported that it was taking on water under the onslaught.

This was getting out of control.

He ordered the Krolowa to move in its hidden position in the inlet, and engage anything that passed with its M40A1 106mm recoilless rifle.

Maks had been monitoring radio traffic. He was intercepting transmissions from the pirates in Polish, but up to this point not learning much more than he could observe himself from the Czersk castle towers.

But now he caught a transmission presumably from the torpedo boat to a station in the direction of Warsaw. The pirates were reporting that they were engaging a heavily-armed force at Góra Kalwaria, and were asking for confirmation that this wasn’t a friendly-fire incident with the Baron’s forces. Warsaw answered “No” to that query.

The barge was noticeably sagging in the water now, but the gunners continued pouring fire on any boat within range.

The truck that had breezed into town turned out to be a local trader who’d blundered into the warzone.

The pirates’ enthusiasm was beginning to wane. They’d lost 9 of their smaller boats, and 2 of the larger craft.

The Korsarz commander – onboard the torpedo boat – ordered a retreat, rather than keep losing his precious boats and men to what had turned out to be a bloody ambush. The river was choked with wrecked hulls and debris.

The party had fared little better. The barge was slipping beneath the surface. Maks ordered his men to board the amphibious APCs and abandon the barge.

The Vistula River was about 4 meters deep at this point. The barge had performed heroically, but far beyond its intended use. All the impacts and detonations were on one side, so it sank unevenly. One corner still bobbed above the surface. The majority was submerged, along with a lot of the party’s gear. Much of the Krolowa‘s fuel supply of cordwood floated away downriver.

Maks ordered all personnel to secure soggy pirate survivors that had made it to shore. He needed intel.

The Black Baron now knew this was no longer mere defiant townsfolk. There would be no more ambushes at Góra Kalwaria.

7 thoughts on “Warsaw: The Korsarz Armada”

Southern Germany Timeline D+10 to D+14 D+10 -VII Corps probing in the direction of the Czech border continues but with less determination than on the previous day. Given the emerging pictures in V Corps sector, as well as in Northern Germany, CENTAG is becoming more content with the prospect of keeping VII Corps mainly in […]